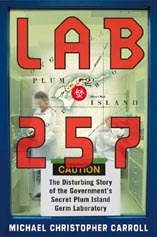 "[A] strong first effort...Carroll argues convincingly that the island is dangerously insecure. Based on sedulous research...Plum Island is rife with the potential for a catastrophic disaster either from an accident or, equally frightening, terrorist action. Readers will hope that someone takes notice.

"If we're lucky, someone in the media will read this carefully researched, chilling expose of a potential catastrophe and force the government to do something about it. If not, Mike Carroll's brilliant work will have been wasted and we may be the victims, once again, of government inadvertence."
--Mario M. Cuomo, former Governor of New York

"Lab 257 proves that scientific fact on Plum Island can indeed be stranger than science fiction. Mike Carroll has the uncanny ability to transport the reader inside the frightening world of Plum Island."
--Lowell P. Weicker, Jr., former Governor of Connecticut and U.S. Senator

Strictly off limits to the public, Plum Island is home to virginal beaches, cliffs, forests, ponds-and the deadliest germs that have ever roamed the Earth.

Nestled in the Hamptons, the fashionable summer playground for America's rich and famous, and in the shadow of New York City, lies an unimposing 840-acre island unidentified on most maps. On the few where it can be found, Plum Island is marked red or yellow, and stamped 'U.S. GOVERNMENT - RESTRICTED' or 'DANGEROUS ANIMAL DISEASES.' Though many people live the good life within a scant mile or two from its shores, few know the name of this pork chop-shaped island. Even fewer can say whether it is inhabited, or why it doesn't exist on the map. That's all about to change.

Lab 257: The Disturbing Story of the Government's Secret Plum Island Germ Laboratory, reveals the stunning true nature and checkered history of Plum Island. It shows that the seemingly bucolic Plum Island, on the edge of the largest population center in the United States, is a ticking biological time bomb that none of us can safely ignore.

For the first time, Lab 257 takes you deep inside the secret world of Plum Island and presents startling revelations, including virus outbreaks, biological meltdowns, infected workers who are denied treatment by the government, the flushing of contaminated raw sewage into area waters, and the insidious connections between Plum Island, Lyme disease, and the deadly 1999 West Nile virus outbreak. Perhaps most troubling of all, it reports how a reputed terrorist with ties to Osama bin Laden was caught in Kabul, Afghanistan with a file on Plum Island.

Lab 257 changes forever our current understanding of Plum Island-a place that is, in the words of one insider, 'a biological Three Mile Island.'

Lab 257: The Disturbing Story of the Government's Secret Plum Island Germ Laboratory
"One of the best pieces of investigative reporting you'll read this year. LAB 257 is must-reading for the post-9/11 world."
--Nelson DeMille, bestselling author of Plum Island and Up Country